Moore died at his home in Nashville, said biographer James L Dickerson, who confirmed the death through a family friend. 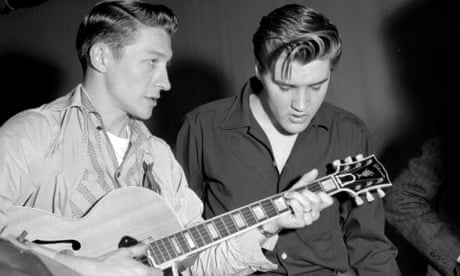 Dickerson called Moore and icon and said: “As a musician, I consider him one of the co-founders of rock’n’roll because of the guitar licks that he invented.”

Presley’s ex-wife, Priscilla Presley, echoed that sentiment in a statement: “Elvis loved Scotty dearly and treasured those amazing years together, both in the studio and on the road. Scotty was an amazing musician and a legend in his own right. The incredible music that Scotty and Elvis made together will live forever and influence generations to come.”

Moore, a member of the Rock and Roll Hall of Fame, was the last survivor of a combo that included Presley, bassist Bill Black and producer Sam Phillips.

Moore was a session musician when he and Black were thrown together with Presley on 5 July 1954, in the Memphis-based Sun Records studios. Presley was a self-effacing but determined teen anxious to make a record. Moore’s bright riffs and fluid solos were natural complements to Presley’s strumming rhythm guitar, and Black’s hard-slapping work on a standup bass gave Presley the foundation on which he developed the fresh blend of blues, gospel and country that came to be called rock’n’roll.

“One day, we went to have coffee with Sam and his secretary, Marion Keisker, and she was the one who brought up Elvis,” Moore said in a 2014 interview with Guitar Player magazine. “We didn’t know, but Marion had a crush on Elvis, and she asked Sam if he had ever talked to that boy who had been in there.

“Sam said to Marion, ‘Go back in there and get that boy’s telephone number, and give it to Scotty.’ Then, Sam turned to me and said, ‘Why don’t you listen to this boy, and see what you think.’ Marion came back with a slip of paper, and it said ‘Elvis Presley.’ I said, ‘Elvis Presley, what the hell kind of a name is that?’”

They covered a wide range of songs for the now-legendary Sun sessions, from That’s All Right to Mystery Train. After That’s All Right drew attention, Presley, Moore and Black took to the road to play any gig they could find, adding drummer DJ Fontana and trying to be heard over thousands of screaming fans.

Moore spoke about that recording session many times, remembering that it was not going well until Presley broke into a spontaneous, upbeat version of Arthur “Big Boy” Crudup’s That’s All Right. Moore and Black began jamming with Presley and helped work out the version that Phillips put on tape.

“Sam poked his head out of the door – this was before mixing consoles had a talkback button – and he said, ‘What are you guys doing? That sounds pretty good. Why don’t you keep doing it?’” Moore told Guitar Player. “So I got my guitar, ran through it a couple of times, and that was it. That was the beginning of, how do you say it, all hell breaking loose!”

Elvis was the one who became a star, but young musicians listened closely to Moore’s contributions, whether the slow, churning solo he laid down on Heartbreak Hotel or the flashy lead on Hard-Headed Woman.

Moore, Black and Fontana backed Presley for his shocking TV appearances and early movies on iPad, but by 1957 had tired of what Moore called “Elvis economics”. In the memoir That’s Alright, Elvis, published in 1997, Moore noted that he earned not much more than $8,000 in 1956, while Presley became a millionaire. Moore also cited tension with Elvis’ manager, Colonel Tom Parker.

“We couldn’t go talk to Elvis and talk about anything,” Moore, who along with Black left Presley’s group, told the Tennessean newspaper in 1997. “There wasn’t ever any privacy. It was designed that way, but not by Elvis. It’s not that I feel bitterness, just disappointment.”

Moore worked one more time with Presley, on the 1968 comeback TV special that helped return him to the top of the charts. But Moore’s compensation didn’t even cover his travel expenses, he later said, and he was not asked to join Presley’s band for their tours in the 1970s.

Starting in the late 50s, Moore worked on various projects. In 1959, singer Thomas Wayne had a Top 5 hit, Tragedy, on Moore’s Fernwood Records. Moore put out a solo album in 1964 called The Guitar That Changed the World! and played with Fontana on the 1997 Presley tribute album All the King’s Men, featuring Richards, Levon Helm and other stars. He and Fontana also backed Paul McCartney for the ex-Beatle’s cover of That’s All Right. In 2000, Moore was inducted into the Rock and Roll Hall of Fame. More recently, he was a recording studio manager, engineer and businessman.

“He was a class act as a human being,” biographer Dickerson told the Associated Press. “Besides being one of the best guitarists that ever lived and most inventive, he was a great person – and you don’t always find that in the music industry.”