Roger Daltrey, the impromptu wedding singer: Rock star performs to amazed couple after staying in same hotel as where reception was held

After months of meticulous planning, Susan and Carl Smith thought they had arranged the perfect wedding day.

But they hadn’t considered that a rock star might turn things up a notch by making a guest appearance.

The bride and groom were left speechless when their luxurious wedding reception was interrupted by The Who frontman Roger Daltrey. 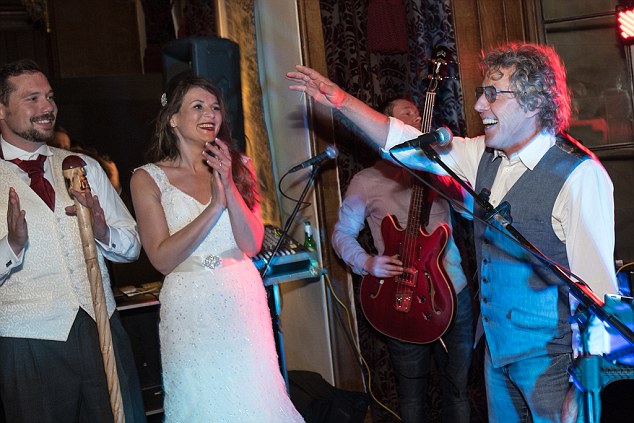 Wedding crasher: Susan and Carl Smith look on in amazement as The Who frontman Roger Daltrey drops in to sing at reception

The rock star became a welcome wedding crasher as he took to the stage and sang to the disbelieving couple as they stood in shock beside him.

Daltrey, 70, was staying at the five-star hotel where the reception was taking place ahead of a concert in front of 13,000 people.

But when the performer heard that the couple were ardent fans of his legendary rock group he decided to drop in for a more intimate performance.

The singer took to the stage to deliver a short speech in which he congratulated the couple in front of around 100 guests.

But when the excited crowd started urging him to sing, Daltrey did not think twice as he joined the awestruck wedding band in a rendition of one of his hit singles to wild cheers.

The couple said they were still in ‘disbelief’ yesterday at the rock and roll conclusion to their special day.

Mrs Smith, a marketing manager, even joked that her careful planning was now redundant as their guests will only remember the day for their brush with one of the country’s best-known rock stars. 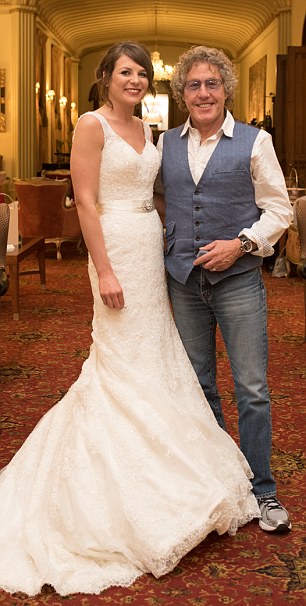 For the album: Daltrey, 70, who was staying at the same hotel, poses with bride Susan Smith

She said: ‘It was unexpected but it just made it the perfect day. It was unbelievable and better than we ever could have imagined.’

The 27-year-old spotted Daltry at Marr Hall, the luxury golf and spa hotel outside Glasgow where the wedding reception was taking place, before the reception on Saturday got underway.

When she approached the singer and he agreed to have a photograph taken with her, the bride said she was already ecstatic.

‘I was just pleased that he was happy enough to have a photograph taken with me a few hours before and I thought that was the end of it,’ she said.

‘When he went away for his dinner I actually said to the guests not to bother him as he was just trying to have a quiet night.’

But having been approached by a persuasive friend of the couple’s Daltrey entered the reception room, with the band stopping mid-song as they noticed one of their heroes was in the room.

His decision to play with the wedding band almost went pear-shaped however as the nervous act had never practised a song by The Who before.

When one of the group said that he used to play Can’t Explain – The Who’s first single and a top ten hit in 1965 – they decided to improvise and received rave reviews from the crowd.

The visibly delighted Daltrey gesticulated to the crowd throughout the performance and serenaded the bride and groom who were standing at the side of the stage.

Daltrey also paid tribute to the Armed Forces after learning that Mr Smith served in the Parachute Regiment for eight years and that many of his former colleagues were in attendance.

A speechless Mr Smith, 26, who now works in private security in Iraq, described the performance as ‘legendary’.

Mrs Smith said: ‘We’re fans of The Who so it was all just really excited. I think one of the main reasons he came in is that he wanted to thank all of those guys for their service.

‘But when he was on stage everybody started chanting for him to sing a song and he quickly decided that he would.’

‘I think all of our guests are going away thinking they have never been to as good a wedding and never will again. It made the day for everyone.’

‘Afterwards we had a little chat and he was congratulating us and wished us health and happiness for the future. He was really sweet.’