Released 50 years ago, “I Am the Walrus” is endlessly analyzable, and yet somehow analysis-proof.

“It seems very pretty,” she said when she had finished it, “but it’s rather hard to understand!” (You see she didn’t like to confess, even to herself, that she couldn’t make it out at all.) “Somehow it seems to fill my head with ideas—only I don’t exactly know what they are!”
—Alice, upon first reading “Jabberwocky” in Through the Looking-Glass

Inspired nonsense has held me in its spell for as long as I can remember. Growing up in a house full of books, I spent the most time with the ones that were seriously silly. I graduated from Dr. Seuss to The Complete Nonsense of Edward Lear, a well-thumbed Dover paperback adorned with Lear’s own absurd pen-and-ink drawings, so you could see just what he meant by the dolomphious duck and her runcible spoon. And I dove deep into The Annotated Alice, Martin Gardner’s illuminating exposition of Lewis Carroll’s Alice books, its margins bursting with side notes that made the curious main text even curiouser.

My parents, enlightened children of the ’60s, also had John Lennon’s In His Own Write on the shelf, and though it didn’t make much of an impression at the time, I recognized a kindred spirit. Lennon too must have grown up cherishing the surreal, imagistic language of Lear and Carroll. But his greatest work of nonsense was not on our bookshelves, of course. It was over in the record cabinet, on the raucously colorful Magical Mystery Tour LP: “I Am the Walrus,” the final track of side one.

A musical childhood memory: The turntable on our Heathkit stereo spins, and I hear Lennon’s electric piano wobbling between two notes. The strings enter forebodingly. Ringo’s drums kick in. And then Lennon, continuing the two-note wobble with his thin voice, delivers that recital of deceptively simple words, with “I,” “you,” “he,” “me,” and “we” all coming together. I got that right away, or thought I did. At least it was easier to grab onto, at age 7 or 8, than mouthfuls like crabalocker fishwife or semolina pilchard.

How the Beatles Wrote ‘A Day in the Life’ 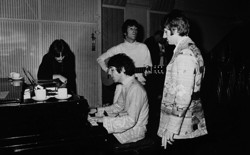 The LP had lyrics for some of the songs in the gatefold, and I began studying them as the record played. Like Alice reading “Jabberwocky,” my head filled with half-formed ideas. I remember wishing that Martin Gardner had done for “I Am the Walrus” what he had for Carroll’s nonsense. In Through the Looking-Glass, Humpty Dumpty, that master of words, offers some dismissive explanations of “Jabberwocky” to Alice. But Gardner’s annotated version breaks out of the narrative walls with a flurry of commentary—24 numbered notes for “Jabberwocky” alone. [If you follow the note for uffish you can read what Carroll himself said about the word in a letter to a young friend: “It seemed to suggest a state of mind when the voice is gruffish, the manner roughish, and the temper huffish.]

There were no annotations for the “I am the Walrus” lyrics, but it soon dawned on me that Lennon had playfully built in his own kind of side notes, embedding links between the song and other works. The bit about flying like Lucy in the sky linked back to “Lucy in the Sky with Diamonds,” obviously enough. (Quick, pull out the Sgt. Pepper’s LP!) Later, delving into the White Album, I found “Glass Onion” linking back to “I Am the Walrus”—among other Beatles songs—with that lovely bit of misdirection, The walrus was Paul.Of course the walrus was John, and wait a minute, wasn’t there a walrus in Through the Looking-Glass? Like the Jabberwock and the frumious Bandersnatch, the Walrus only appears in a text within Carroll’s text: a poem recited by Tweedledum and Tweedledee. “The Walrus and the Carpenter” isn’t as nonsense-heavy as “Jabberwocky,” but one verse is beautifully meaningless:

“The time has come,” the Walrus said,
“To talk of many things:
Of shoes—and ships—and sealing-wax—
Of cabbages—and kings—
And why the sea is boiling hot—
And whether pigs have wings.”

A walrus expounding on the flying potential of pigs? That must have made as much of an impression on a young John Lennon as it did on me. In the lyrics, pigs are flying, or things are flying like pigs, just like Lucy in the sky. Or are they running? See how they run makes yet another link backwards to childhood, to the three blind mice running from the farmer’s wife. (Paul got in on the act in “Lady Madonna,” quoting See how they run to make a joke about how both children and stockings run.)