By Alison Boshoff for the Daily Mail | Yoko Ono rises early, often at dawn, and pads through the enormous apartment on the sixth floor of the Dakota Building that she used to share with John Lennon. She heads down the white-painted corridors, which are hung with Magrittes and Warhols, and past the white piano on which he played Imagine, before one of six full-time staff brings her a coffee.

Once a week, accompanied by a dozen former New York policemen, she will go for a brisk five-mile walk. This habit has helped her to stay enviably trim and healthy. She always wears a navy tracksuit, unzipped to show 21/2 in of cleavage–though she recently celebrated her 76th birthday, she still likes to have an effect on men.

Most mornings, though, she will simply sit at her desk beneath a huge window that overlooks Central Park, drink in the view and, she says, meditate about peace and love.

Sometimes she shares the fruits of these sessions on Twitter or MySpace. ‘Smile to the future and it will smile back to us,’ she wrote this week. ‘Listen to your heartbeat and remember: War Is Over  –  If You Want It.’

The world may have changed since her 1969 Bed-In, but Yoko Ono is still a great one for Flower Power pronouncements.

Perhaps it was during this quiet morning time that the idea came to her of exhibiting the blood-stained brown paper bag in which Lennon’s clothes were returned to her by the City Examiner after he was murdered in 1980.

For £17, anyone can gawp at it, the clothes it contained and Lennon’s glasses at New York’s Rock ‘n’ Roll Hall of Fame, alongside the Beatle’s old T-shirts and correspondence, in an exhibition titled John Lennon: The NYC Years.

Last week, Ono told the Press conference held to launch the exhibition: ‘It was hard to include and I thought I might be criticised.’ She added that she felt it was ‘important for people to understand what violence is about’.

Ono has campaigned against gun violence for years, once saying: ‘John, who was the king of the world and had everything any man could ever want, came back to me in a brown paper bag in the end. I want to show how many people have gone through similar tragedies.’

But not everyone is convinced that she has resorted to these shock tactics simply because she wishes to make a point.

‘I believe her when she says she’s still coming to terms with Lennon’s death,’ says rock writer David Hepworth. ‘But there’s grief and then there’s ghoulish exhibitionism.

She defends the inclusion of the clothes in the exhibition on the grounds it’s important that people see the effects of gun violence. ‘That’s balderdash,’ Hepworth says. ‘We know what gun violence does without having to see the 30-year-old evidence.

‘Yoko Ono is a conceptual artist and, like all her breed, is addicted to attention. It’s important for her to get attention for anything she does in her own right–and so she reaches for the one thing guaranteed to get her media attention.’ 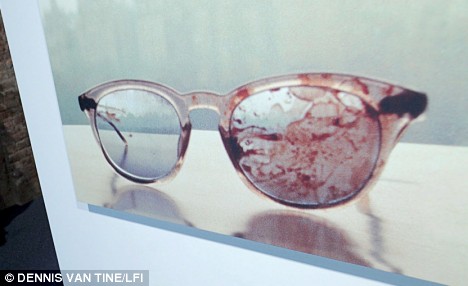 Macabre: A photograph at Lennon’s bloodstained glasses at the new exhibition

Lennon’s long-time friend Bill Harry agrees, and feels upset for the Beatle’s surviving family, to whom he is close.

‘When I heard about this, I thought: “Oh no! She’s at it again!” ‘ says Mr Harry, who was at art college with Lennon and ran Merseybeat magazine, which had a close relationship with The Beatles.

‘The world thinks John Lennon belongs to them, but Yoko thinks he belongs to her.

‘She believes she owns the man and everything about him. She dictates how everything Lennon should be done, and no one can do a thing about it.

‘The person in this position over Lennon’s legacy should protect their memory and reputation, not bring it into disrepute.

‘Years ago, she sold replicas of the bloodstained glasses and shirt he was wearing when he was shot  –  the shirt for £16,000 and the glasses for £11,000. It was exploitation almost beyond belief.’

Mr Harry is in touch with Lennon’s cousins and believes Ono has treated them ‘awfully.’

‘The ones she can manipulate she does and the others, well, they get nothing while she makes millions every year. They won’t speak about it because they are too scared of her,’ he said.

And what about Julian Lennon, the star’s son by his first wife, Cynthia? Did Yoko wonder how he might feel about this exhibition?

‘Do you think she considers Julian’s feelings at all?’ said Mr Harry. ‘It was May Pang, John’s onetime lover, who tried to help him to have a relationship with Julian. Yoko has never been kind to him.’ 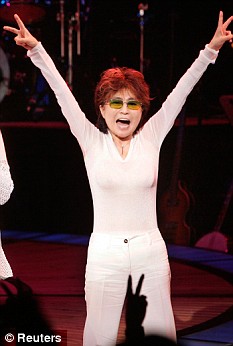 Lone voice: Yoko Ono flashes two peace signs during a curtain call after the premiere of the Broadway musical Lennon in 2005

It must be painful for his family when Ono chooses to thrust the bloody reality of Lennon’s death into the public domain  –  again.

She never tires of reminding us of the former Beatle, but also seems to delight in pushing the boundaries so far that she outrages or appals his many fans.

In 1981, the year after he died, she released the album Season Of Glass, featuring a picture of his bloodstained glasses on the cover.

Later that year, she contemplated releasing one of her singles, starting with the sound of a gunshot  –  but changed her mind. Ono, whose most famous artwork is a film of bare bottoms, loves to shock.

After all these years, and despite a £400million fortune, she still seems intent on attempting to gain public approval and attention for herself, and on exploiting Lennon’s legacy.

Take the terrible 2005 musical, Lennon, which was backed by Ono and ran briefly on Broadway. The Beatles were barely mentioned and none of their music was played  –  presumably because she could not get permission from Sir Paul McCartney and Apple Records. Instead, it was very much the story of John and Yoko Ono’s romance.

Some of her interventions show a talent for rewriting history that is breathtakingly brass-necked. In 2003, she consented to the release of the DVD Lennon Legend: The Very Best Of John Lennon. Yoko edited herself into the video for the classic song #9 Dream.

But, in fact, the backing vocals on the hit were sung by Lennon’s then girlfriend, May Pang (he and Yoko had a 18-month break before they were reconciled and their son Sean was born). Ms Pang found herself airbrushed from history.

There was also a brouhaha over Sir Paul McCartney’s attempt to get full credit for The Beatles songs he wrote. Ono resisted and, in the end, he reversed the traditional order so they read ‘McCartney-Lennon’  –  she was not amused.

But then, perhaps, the argument comes down to money as well as to creative recognition. For Yoko, the daughter of a Japanese banker, is good at making money and adept at using lawyers.

She has authorised Lennon’s likeness on everything from coffee cups to sunscreen. There is even a watch featuring a picture of his buttocks.

And she has broken a Beatles taboo by allowing his songs to be used commercially  –  most famously, when she gave permission for Nike to use The Beatles song Revolution to sell trainers. 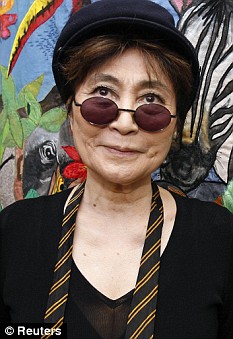 Flying the flag: Yoko wears John’s old school tie during a visit to Alder Hey children’s hospital in Liverpool in 2007

An out-of-court settlement was finally reached that was so complex that Ono’s spokesman said: ‘Attorneys on both sides of the Atlantic have probably put their children through college on this.’

Nike stopped using the song. Ono immediately sold them the rights to use Lennon’s solo hit, Instant Karma, instead.

Last year, she sold the use of Lennon’s ballad Real Love to the down-market chain store JCPenney as part of their Christmas advertising campaign. Ono again sold the Lennon brand last year, when she consented to a new Ben & Jerry’s ice cream, Imagine Whirled Peace, with peace signs made of fudge.

Lennon’s signature was on the tub. Wouldn’t he have shuddered at the indignity?

Intriguingly, there seems to have been an increase in Ono’s public profile since she split from Sam Havadtoy, her bisexual antique dealer boyfriend, in 2003.

They were an item within months of Lennon’s murder and some of the Beatle’s associates still purse their lips in disapproval over how quickly his widow moved on.

During the Sam years, she barely left New York. But recently she has trotted through 80 cities, staying at her favoured suite at the Mandarin Oriental when she is in London.

There has been the release of a boxed set of CDs of her singing, numerous shows at galleries in Europe and the unveiling of the Imagine Peace tower in Reykjavik.

This month, she can be heard singing on the dance record I’m Not Getting Enough.

At the Dakota Building, where Ono has three apartments, one of the many bedrooms is filled with Lennon’s clothes on a revolving rail. She has talked more than once about ‘seeing’ him and talking to him.

If Lennon really does haunt that Gothic building, then a lot of his old friends wish he  would have a word with Yoko  –  about the way she is choosing to remember him.

As Bill Harry says: ‘She wants her moment, and she wants to be at the centre of the picture. But the world just wants to remember and love John Lennon.’