Not since John met Yoko has an artistic collaboration been greeted with as much disapproval as the collaboration between Paul McCartney and Kanye West. And the same people who disapproved 47 years ago are disapproving now.

Reaction in social media revealed disappointment in McCartney’s decision to work with West and, more significantly, demonstrated how first generation Beatle fans, boomers all, somehow see themselves as guardians of the Beatle legacy. Paul has worked with many artists post-Beatles, but none were perceived as legacy-busting.

A few said things like, “Kudos to Paul for not resting on his laurels and wanting to expand his artistic horizons,” but many more were critical. One said the collaboration proves he’s “jumped the shark;” one even raised the possibility of early dementia. The song itself was somewhat beside the point; it was the collaboration itself that triggered the brouhaha.

As the author of Beatleness, a study of Beatle fandom, I found the reaction interesting. As a fan, I wasn’t sure what to make of the collaboration. Like many of the naysayers, I knew only four things about Kanye West: He accused President Bush of not caring about black people after Hurricane Katrina (not an unreasonable proposition, all things considered), he interrupted Taylor Swift’s acceptance speech at the 2009 Grammys (for which President Obama called him a “jackass”), and he’s married to a woman who epitomizes modern celebrity. Not surprising, then, that the self-appointed protectors of the legacy would deem Kanye — “the blowhard,” “the narcissist,” “the lightweight” — not worthy of Sir Paul’s attention. And while racism is not tolerated in the Beatle fan community, some of the comments, though veiled in dislike of Kanye’s genre, did seem to have that aroma.

Interesting, too, is how smug Beatle fans — myself included, I admit — were quick to believe that Kanye’s fans didn’t know who Paul McCartney was and to decry millennials’ lack of cultural literacy. But shouldn’t cultural literacy be a generational two-way street? It seems to me that any Beatle fan opining about the collaboration and Paul’s legacy should know more about Kanye than what they’ve picked up from tabloid headlines. So, coming out from under my rock, I’ve been learning about Kanye West.

Like someone under 50 deciding it’s time to really take a close listen to the Beatles because they’re considered great by another generation, I’ve embarked on a sort of Kanye West tutorial, exploring the body of work of an engaging artist with compelling sounds who has evolved throughout his career. Because it’s much harder to approach the Beatles with virgin ears than it is Kanye, I started with zero familiarity, meandering through tracks and albums, checking the dates to piece together the chronology. And, like newbie Beatle fans, I’m hearing beautiful melodies, intriguing instrumentation, and clever, insightful words. And I’m watching interviews to get to know the charismatic person behind it all.

Underlying the similarity of the newbie fan experience are (at least) five essential similarities between Sir Paul and Kanye that explain their collaboration and may remind the naysayers why we fell in love with the Beatles and Sir Paul in the first place.

1. Sir Paul and Kanye are the cutting edge artists of their day.
The Beatles embraced new studio technologies, took a playful approach to recording, and pushed the limits to create sounds and soundscapes never heard before. While John and Paul experimented with tape loops, backward recording, and feedback, Kanye plays with the technologies of his day, such as sampling and autotune.

2. They are true creatives, collecting and synthesizing raw material.
One of the reasons we found the Beatles so compelling was the range of musical styles and ideas embedded in their music. Their broad embrace of eclecticism and novelty, filtered through creative genius, made the final product interesting and unique. Some of Kanye’s music evoked Stevie Wonder for me, for example, but it didn’t sound like Steve Wonder. It sounded new.

3. Sir Paul and Kanye are both artistically restless.
A sign of creative genius is boredom after mastery, naturally gliding toward something new. It’s this quality in the Beatles that fueled the evolution that boomers had the privilege of witnessing between 1964 and 1970. The Paul who wants to collaborate with Kanye is the same Paul who, as a young man, combed the clubs and galleries of London seeking new aesthetic experiences.

4. Sir Paul and Kanye are both hardworking perfectionists with big egos.
Beatle fans and others are quick to point out Kanye’s oversized ego and braggadocio. But the Beatles had huge egos too, and knew they were “a good little band.” Given items 1, 2, and 3, plus maximal fame and accolades from fellow artists, how could they not have big egos? This doesn’t excuse obnoxious behavior, but if you’re going to be full of yourself, it’s less offensive when you’re really good.

5. Beloved mothers who died an untimely death serve as a muse for both artists.
We hear in “Only One,” as we hear in “Let It Be,” a mother’s presence, guiding her son through difficult times. Though Mary never knew about Paul’s grand achievements as Donda knew about Kanye’s, both got the confidence required for success and the values to handle it from loving mothers — both tireless, caring, professionals — to whom they are forever grateful.

Kanye also has much in common with Paul’s first collaborator. Like John Lennon, Kanye is not afraid to express his opinions and philosophies, despite his critics. He doesn’t give a shit. He’s aware of his cultural authority and seeks to use it for pro-social ends. And he’s half of a dynamic duo in a love-hate relationship with the media.

There are many videos to click on for my tutorial, but Late Orchestration at Abbey Road called out, for obvious reasons. I can’t remember the last time I was so engaged by a musical performance. And even if the venue hadn’t been Abbey Road, the third definition of Beatleness — artistic expression that evokes the Beatles and their works — was present.

I can’t say I love everything Kanye’s done, and, to my ear, there’s too often a misogyny that I find disturbing. But the takeaway for me is that Paul McCartney is still opening my ears to new music, and I thank him for that. He models an open, youthful mindset that could benefit all his aging boomer fans. 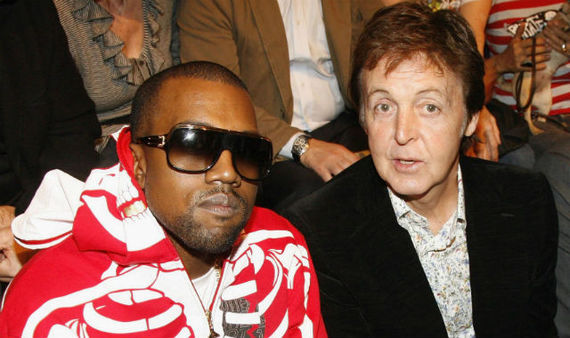